Lake Titicaca’s cold deep, crystal-clear Andean waters, gently ripple the shores of Copacabana. And, at a height of just over 3,800 metres and bordering Peru, Bolivia’s Copacabana is a great town for chilling.

Each time I hear the name Copacabana I have to laugh. Images of a very young and smooth Barry Manilow singing the Copacabana song about a sleazy nightclub, starts manifesting in my head. Yeah I know, showing my age now, and I’m not even a Manilow fan. 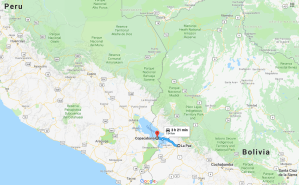 From La Paz, it’s an easy three to four-hour journey by bus until arriving to Lake Titicaca.

As Copacabana is on the other side of the lake, the bus is then loaded on to a timber raft moved around with an outboard motor for 15-minutes, until hopping back on the bus to continue to Copacabana (Copa).

Short bus hops in Bolivia are so much easier than some of the 13-plus-hour bone shattering journeys.

Expect random stops along the way, for young girls or elderly women to board the bus and sell their snacks or souvenirs – happens throughout Bolivia.

With expansive shimmering lake waters reflecting on this small town, Copa exudes a breath of tranquillity and respite from the chaos of La Paz.

This picturesque small lake town is famous locally and internationally for religious festivals, and so, is host to numerous fiestas throughout the year.

Most of us perhaps first heard of Lake Titicaca whilst in school, when described as the “highest navigable lake” on earth. Just this description is enough to conjure up images of an impassable and inhospitable lake, stretching as far as the eye can see…

Rest assured, these images are quickly quashed when you first set eyes upon this serene lake-scape.

It’s very easy to really relax along the waterfront, whilst casually meandering from one restaurant to another, or one snack stand to another.

Going for long romantic strolls along the shore, lined with small boats whilst trying to dodge the occasional lake vendors selling trinkets, is a great pastime.

Sunsets over Lake Titicaca are something to behold – striking hues and colours grace your lens.

Basilica of Our Lady of Copacabana

This impressive 16th-century Spanish ‘colonial shrine’ dazzles brilliant white, against the deep blue sky. At this altitude, the air is crisp and clear.

Several beggars set up patches of territory for the day, around the basilica’s courtyard.

These guys can be annoying with constant badgering, especially at the entrance – be firm.

An impressive bronze sculpture of Bolivia’s indigenous sculptor Fransisco Tito Yupanqui – descendent from the Quechua people and from the 1500s – stands proud on the basilica grounds.

With Yupanqui’s increasing monotheistic beliefs whilst studying, the legend of the sculpture’s inception goes something like this…

In the 4th month of the Indian calendar, a beautiful woman carrying a child appeared before Yupanqui, which forced him to re-create this image. Contrary to the parish priest’s request of creating the sculpture to resemble European facial characteristics, Yupanqui created the face to resemble indigenous Bolivians instead.

This then was known as Nuestra Senora de Virgen de la Candelaria (Our Virgin Lady of the Candles) – patron Saint of Bolivia.

Start your walk at the northern end of town, at the brightly-coloured red church, Capilla del Señor Colquepata Cross (Calvary) on 3 de Mayo.

Climbing past the 14 Stations of the Cross during the half-hour steep climb up this hill, will leave you slightly breathless.

As does the breathtaking views of Lake Titicaca arrest your senses…

…and the scent of heavy smoke-filled air, from continual burning of offerings to Gods and saints, at the blackened alter atop of the hill.

Built in the 1950s, this popular mecca is frequented by pilgrims, especially on Good Friday and Easter Sunday.

A popular picnic spot with locals, the views across the lake are memorable.

Spend some time up here wandering around, to see the best vantage points of Lake Titicaca. I’m not sure whether there is anywhere else in the region that offers such spectacular views of the lake.

It’s such a shame that locals can trudge picnic goodies up this hill, but when the time comes to leave, garbage is either left on the hill, or tossed over the side to the next level down.

I can never understand this mentality…

Although quite touristy, a day trip from Copa to the Isla del Sol (Island of the Sun) across stunning Lake Titicaca, is worthwhile for some hiking and to see the island’s beauty. You can also include a visit to a floating island made of reeds on this trip.

Hearing about day trips from the Peruvian side and as we’re heading there next, decided to also go on the longer day tour that includes Taquile Island and the floating reed Uros Islands from Puno.

Amble along the lake’s shores to any of the restaurants offering lake trout or other various types of delicious fish. You can’t go wrong here really and of course, it’s fresh. Copa is famous for Trucha (trout) and hailed to be the freshest in Bolivia.

Everyone dines at these rustic waterfront abodes, so they are inexpensive and have to be good.

Hostal Brisas del Titicaca comes with clean rooms and gorgeous views of the lake. Enjoy a refreshment on the patio whilst watching the ever-changing sunset vistas.

Just check details before booking and make sure you know exactly what you’re getting in the room’s price.

Most travellers arrive in Copa and stay several days before crossing the border into Peru with Puno as the first stop, or making their way to La Paz.

After reading a couple of stories about dodgy bus trips crossing the border between Copa and Puno, still decided that the bus is the best way to go anyway…