If you own a boat, then you will inevitably experience slipway woes at some point in your life, as related in this chapter of the sailing journey.

Apologies for the poor quality photos from 1998. The 35mm negatives lived on the boat in extremely humid conditions before moving to storage on land in intense heat.

After outrunning Justin, a pesky Category 3 cyclone for a few weeks on the sail down from Townsville finally, reach Gladstone in one piece and unscathed…

…albeit a few weeks’ late for the skipper’s contract start date. Who can argue with a cyclone?

You’re not allowed to anchor in Gladstone Harbour. Instead, you need to pay for a berth in Gladstone Marina. Pylons to string ropes between are also available in Auckland Inlet, but further from the city. As we’re working, it’s 10 months in the marina.

The luxury of a marina in Gladstone is a double-edged sword.

It’s the first walk-on walk-off marina that Naiad (our home-built boat) uses as a long-term home. Power and electricity are abundant. The downside is that there’s zero privacy.

As this marina is relatively new, it’s not gated, which proves a novelty for Sunday locals wanting to ogle in Naiad’s companionway to see what’s inside.

Many a shock is had for residents and tourists when walking around almost naked in just a T-shirt during the sultry humidity. After all, Naiad is our home.

A little on Gladstone

This city has the highest respiratory diseases in Australia and it’s not hard to grasp why. You only need to look at cars parked outside Comalco’s (now Rio Tinto Alcan) refinery – it’s as though acid spilt over the paint and almost melted away.

An industrial town with a multi-commodity shipping port, wake early enough for sunrise and you’ll witness an orange chemical plume hovering over the city in the still air.

Living on a boat in Gladstone is just like living on Mars. The reception from landlubbers is one of incredulous astonishment and disbelief. Why do you live on a boat?
Although once you get to know locals, they’re very kind and hospitable – this just takes time.

Days off are spent on leisurely sail jaunts around the wilderness of Curtis Island and smaller islands close to Gladstone Harbour, when not working on Naiad.

Seems as though Naiad is continually in the boat hospital or we’re re-designing to improve some feature or another. Although, this re-design is preventative maintenance.

Following the plans whilst building Naiad and not wanting to deviate, the sail track that’s welded to the deck creates tiny hard-to-get-places and prone to rust spots. Not great on a steel deck.

Ripping up the deck tread and removing the sail track, a piece is cut out of Naiad’s steel toe rail. And, the new base to hold the sail track is welded in the toe rail’s place.

Of course, welding burns and bubbles the surrounding paint. So, more priming and undercoating leave an ugly patchy mess on both sides of Naiad’s topsides. If you ever worked with Polyurethane paint, you know that it’s difficult touching up this paint seamlessly. The patch always ends up looking like a botch job.

A total re-spray is needed…again. I swear there’s more paint on this boat than steel and over the years, the paint probably cost more than the actual steel to build Naiad.

Gladstone’s a little expensive for slipping so decide on the re-spray further south in Maryborough.

The skipper’s 10-month working contract comes to an end, so I also leave my job.

Sadly, after making good friends in Gladstone, it’s time to say goodbye once more. We’re off again and decide to return to the big smoke of Brisbane.

The sail needs to be timed just right as the summer months bring northerly winds and great for sailing south, but it’s also the end of the cyclone season. As the winter months bring southerly winds, you can expect winds on the nose. Not great, but typically, cyclones aren’t active during winter. Life is always a compromise on a boat, although need to be prudent and respect Mother Nature.

Navigating the long 11NM (17-kilometres) up the muddy brown waters of the Mary River to the sleepy city of Maryborough, we land at the rustic slipway run by its rogue owner. Prone to flooding during the wet season, the river spills out into Queensland’s mighty Great Sandy Strait.

A little on Maryborough

Back in 1998, Maryborough’s quietness with not much happening offers delightful historic colonial buildings in the town. A legacy of the colonial entrepreneurs that pushed into the area establishing pastoral stations in the 1800s, whilst poisoning the area’s indigenous people.

Established as a major port of entry in the early 1900s, Maryborough saw many immigrants from around the world arrive, which today is what also makes up Maryborough. On this visit, we’re not here for sight-seeing but to work on Naiad once more. 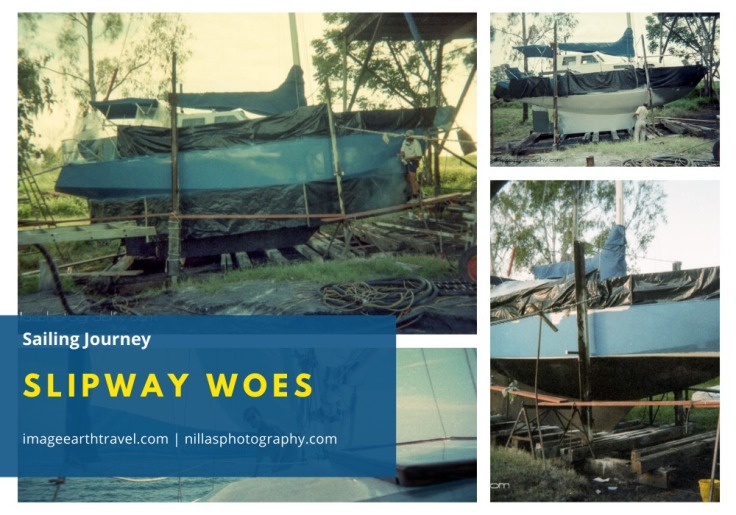 With a little light sanding to key Naiad’s topsides, she’s ready for a lick of paint. After the paint dramas in Townsville whilst extending Naiad, this time we hire a couple of professionals and their gear. 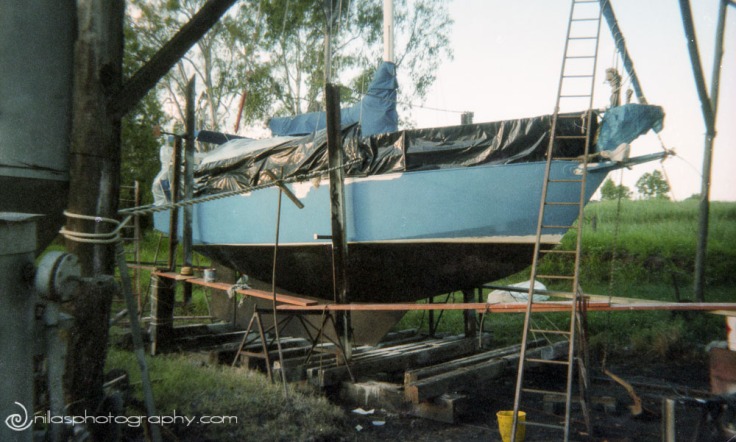 The undercoat goes on… 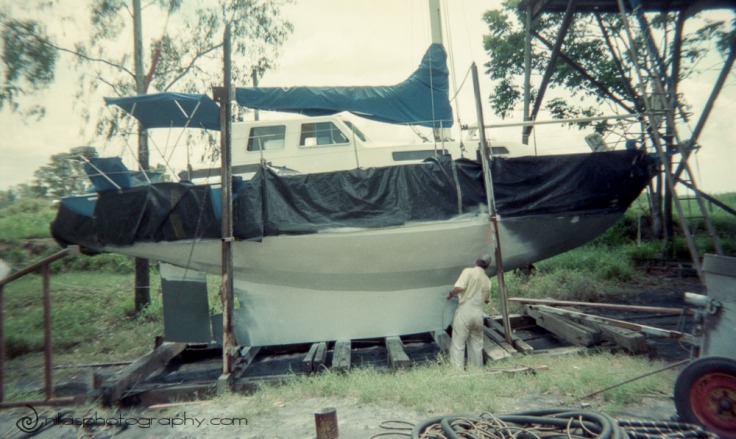 Looking quite fashionable in an oversized grubby shirt – cue sarcasm – we finish more jobs whilst waiting for the undercoat to dry. A boat requires continual maintenance, just as does a house. 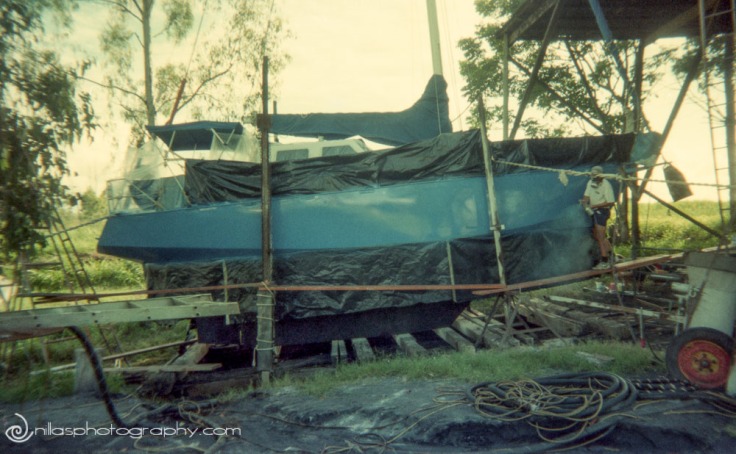 Of course, when it’s time to finalise the bill, the slipway’s owner tries to rip us off. Although, prior to arriving here we heard from other yachties that this is what he does so prepared for his antics.

In my books, a deal is a deal. A quote is a quote.

Accusing us of still owing money, which is utter rubbish, the owner threatens not to launch Naiad. And, even has the audacity to phone the marina and advise that we still owe him money. Eventually, with much persuasion, the owner eventually comes around and agrees to launch Naiad. Although, instead of the usual winching a boat down the slipway gently, he forgoes the winch.

Naiad freewheels down the rickety track at an alarming speed before hitting the water and coming to a splashing dead stop.

Absolutely frightening! I’m alone and around 2-metres up in Naiad’s cockpit still on the slip. At this speed, the boat can easily tip over and crush me – one word. This unwarranted and dangerous behaviour is even after the skipper helped to fix the slipway’s dubious old track for free. 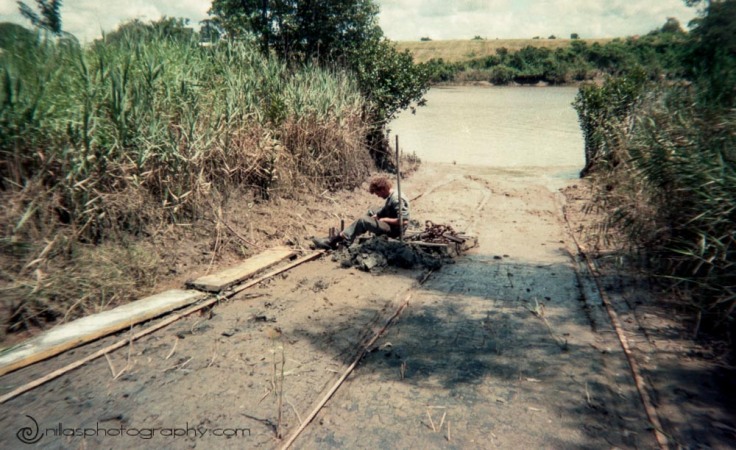 This is the first time in 10 years of slipping Naiad that we encounter a nasty owner and we’re treated as cash cows. Word of mouth is a powerful tool in the small boating community.

Escaping the slipway’s near-death clutches and a watery grave in the Maryborough River, Naiad ambles along the river until a good anchoring spot is found. Still winding down from the past two weeks of stress on the slipway, we leave Maryborough for a leisurely and pleasant slow sail back to Brisbane.

Motoring up Brisbane’s long river and working the tide is a familiar route for Naiad.

Picking a spot between two piles and similar to a few years ago when we arrived at The Gardens, we string ropes up once more – we’re home.

This berth in the middle of a major Australian city is the best so far, for its location to everything and also because it’s not expensive. A safe base to leave the boat whilst travelling overland in Australia or venturing internationally.

Facilities are good and although it’s not a walk-on/walk-off marina as in Gladstone, I much prefer this type of berthing or anchoring Naiad, as there’s more privacy.

Time to look for jobs again as saving for a 4-month backpacking trip to Indonesia. Future posts to come.